Last week’s Fashion Week in Rome featured pieces by a designer who used a nearly extinct craft to create her patterns. The designs were made with woodblock printing, a textile technique that was once at the core of Syrian culture. This collaboration was a huge feat for Sarah Hayes, who has been fighting to revive the craft in Lebanon.

Originally traveling to Syria from China and India through the Silk Road, woodblock printing has been threatened by war complications and mass production and is quickly disappearing. The craft involves creating blocks with specific designs, printing the wooden blocks onto textiles, and then making fabrics from the patterns. The designs are inspired by lost motifs, such as architecture from traditional Syrian homes that have since been destroyed.

Hayes first discovered woodblock printing while working for a local NGO in India. Instantly falling in love with the vibrant colors and textures, she began studying the technique and was inspired by its roots and depth. At its core, block printing is a community-centered activity that allows people to connect with each other and with their heritage.

Through her research, Hayes encountered a woman named Zeina, one of only a few people left with knowledge and appreciation for the craft. For the past 40 years, Zeina has fought for the revival of woodblock printing. Zeina sparked her love of the printing technique at the age of 14 after finding a small block in a Syrian market. She began collecting every block she could find, bringing them with her when she fled Syria, and establishing a workshop to teach others. After seeing no significant progress for years, Zeina was about to retire and give up before meeting Hayes. The combination of Zeina’s knowledge and Hayes’ passion and energy allowed her fight to carry on after her retirement.

The onset of the pandemic gave Hayes the push she needed to take a sabbatical and really commit to the revival of woodblock printing. She has since resigned from her previous job and now lives full-time in Lebanon, building Studio Kunnuku and creating a network of artisans and seamstresses. She’s recently been working to create a library with resources on the craft to ensure there’s always an opportunity for learning, a project made possible by a seed grant from The Pollination Project. There is minimal documentation of the woodblocking technique, and the establishment of the library will guarantee that woodblock printing is not among the lost pieces of Syrian heritage.

Hayes’ biggest hope is “to scale the project to a point where this initiative is employing a sizable number of people, so that I’m creating opportunities for people to have income, but at the same time creating meaningful jobs where people feel like they’re contributing to a collective memory of their country.”

With a raging war and twisted narrative surrounding Syria, many essential pieces of culture and information get lost or misrepresented to outside eyes, the consequences of which are unimaginable. Many people behind the studio, as well as those it helps, have been stripped of basic human rights. Many are stateless, without the right to a nationality or even the right to opening a bank account.

After lots of hard work, Studio Kunukku is finally picking up traction and getting noticed. Rome Fashion Week was a huge step, and the studio is gaining more attention in markets around Lebanon. When a friend recommended The Pollination Project to Hayes, she was thrilled to receive the seed grant and get to work on the library, which would help greatly with community outreach and education.

“I was so happy,” she said. “I was happy because the project was seen, it was heard, it was recognized. And not only was it about the money, I felt like we could be joining a bigger community. As I started to see the other kinds of projects, I really felt the sense of a bigger change-making community.”

The more attention the studio gets, the more people it can help. The growing traction is invigorating, and there’s still more to do.

“It’s putting us at a stage where our story is heard somewhere we never could have imagined,” Hayes said. “We can start to challenge the narrative about Syria and tell the story of its craft to fashion designers in Rome. That’s amazing” 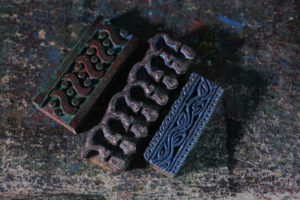 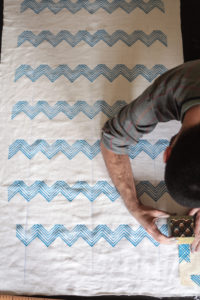