The Abortion Diary: A Unique Space for Stories and Conversation We Need Now

One of the most challenging and important things for our country and our world to try right now is to engage in conversations and hold space for people to share their stories without judgment. The ability to give full, open-heart and mind attention to people – outside of a political or social lens –  and allow them to feel seen and heard has the power to not only bring about connection and a deep understanding of our shared humanity, it has the power to transform the art of conversation as we know it. That is exactly the kind of space that Melissa Madera created when she began her project, The Abortion Diary.

“I was 17 when I had an abortion – just a teenager – and I didn’t have anyone to talk to about it. It was like there was this unwritten rule that no one was to talk about it.  Then in 2010, I shared my story for the first time and from there, I just wanted to meet other people who had also had abortions and hear their stories.  I started searching for something online. At that time, there were two online spaces where people were writing and sending their stories. But I was looking for something audio based. I felt there was something healing and personal in hearing another’s voice,” Melissa shared. 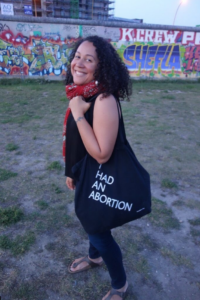 After attending an abortion conference in 2012 where she bought a tote bag that read, “I HAD AN ABORTION”, Melissa started carrying that tote bag everywhere and it sparked conversations. People wanted to talk and in 2013, without any experience, Melissa started a podcast focused on abortion stories. As Melissa told people about it, many stepped forward to be interviewed, inspiring her to spend the next five years living out her suitcase (and carrying around her tote bag) while recording stories around the U.S. and abroad.

The Pollination Project was the only organization that provided any seed funding for Melissa’s project. Oftentimes, she received pushback from organizations focused on abortion around how people shared their stories and how she constructed the project but she had a vision for what she wanted to create – she wanted people to be able to share their stories on their own terms and in their own words. She wanted them to feel free to speak their raw truth. However, there were people in the abortion rights movement who only wanted to hear and share certain narratives. This project was challenging how they thought of or saw those who had abortions. Therefore, they would not support Melissa’s vision. Yet, that did not deter her. Using her own money, she traveled the globe so that people could share their abortion experiences, find community, and find support through storytelling.

“My own story is not cut and dry – most people’s stories are not cut and dry. A lot of people have never shared and when they do, we have to remember that it’s not a political decision, it’s a personal one and I’m here for that. We have to make space for all the people who don’t have an experience you expect them to have – I think the more we do that, the better we are as a society. I think that’s the only way to get out of the really difficult situation we are in right now,” said Melissa.

At a midwifery skills workshop, when Melissa was still a birth and abortion doula in NYC, she mentioned that she was starting this podcast of abortion stories and within that one group of eleven women, five wanted to share their story. It was clear that she was meant to bear witness to people’s experiences. So, she sold her car and got rid of almost everything she owned and began traveling in order to meet people and listen to and record their stories. She stayed with friends of friends – strangers – who wanted to share their stories or support the podcast. She traveled by bus, train, plane, and even a used car. Her abortion story-listening adventures did not only take her around the U.S., but she also found herself in Canada, Europe (where she would record stories over five months as she traveled from Northern Ireland to Poland), Thailand, and South Africa. Though there are still places she needs to visit, she has amassed stories of people who had abortions in over 35 U.S. states and 21 countries. She also spent a year in Ohio where she received a teaching fellowship at Denison University that allowed her to teach and create an exhibit called “Artifacts: abortion stories and histories,” which included visuals and audio from the podcast.

After years on the road, Melissa reached a point where she needed a paying job. She became a researcher on Project SANA , the Self-managed Abortion Needs Assessment Project, the first, large-scale research project on self-managed abortion in the U.S. She interviewed people who had self managed their abortions using abortion pills they’d received from Aid Access, an organization founded by Dr. Rebecca Gomperts, that mails abortion pills to people in all 50 states. Dr. Gomperts founded Aid Access in 2018 after receiving so many requests through  Women on Web, an international online abortion service Gomperts founded in 2005 to serve international settings where abortion is illegal, in order to support people seeking abortions in the U.S. who could not otherwise access abortion care. Project SANA also interviewed abortion providers at clinics around the country that they partnered with in fielding a survey of approximately 20,000 people at 46 clinics in 29 states in order to learn about their knowledge and perspectives about self-managed abortion. Melissa is also a member and on the board of inroads (the International Network for the Reduction of Abortion Discrimination and Stigma), a global network and community that focuses on reducing abortion stigma around the world that has been very supportive of Melissa’s work.

Currently, Melissa is the Director of Research and Partnerships at Choix, a telehealth clinic providing abortion and other sexual and reproductive healthcare in California, Colorado, Illinois, and New Mexico. Choix was founded by Clinicians who were already working in reproductive care. They plan to provide abortion care in every state where abortion is legal by the end 2023.  Melissa works to build partnerships with local and national practical support organizations, reproductive health and justice organizations, and abortion funds. She also contributes to developing patient-focused educational materials. 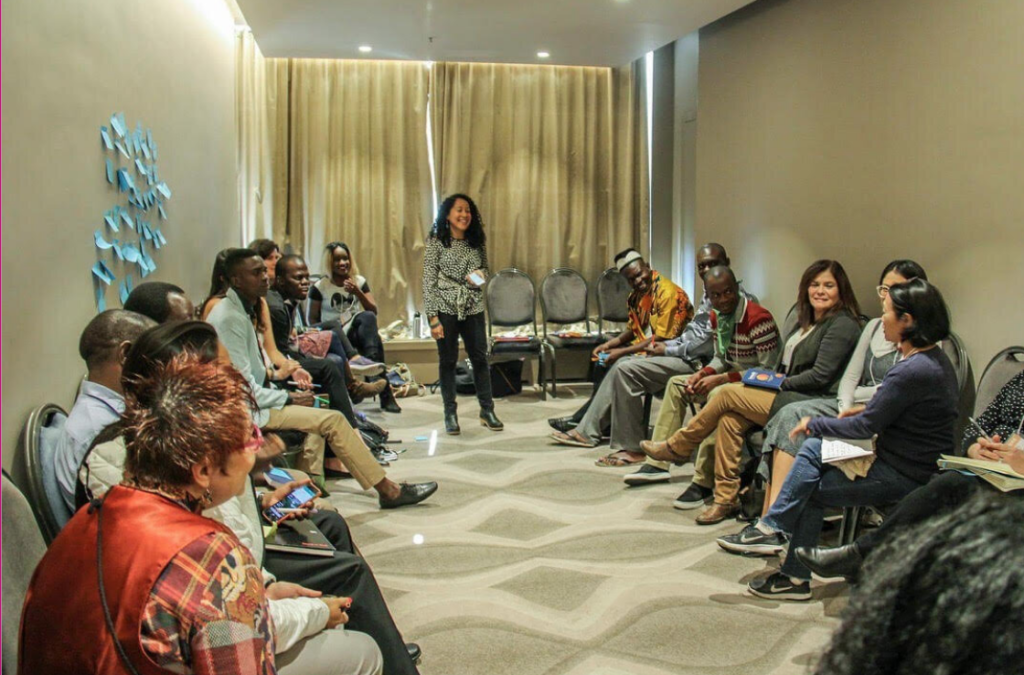 As Melissa thinks about the next step for The Abortion Diary, she reflects upon how The Pollination Project helped her to create a nonprofit by connecting her with a pro-bono lawyer.

“I’ve never gotten any big grants and the seed grant I received from the Pollination Project helped to support the project’s operations and allowed me to keep it going and even buy some equipment. I really appreciate it! It meant so much for The Pollination Project to see the importance of this work and take a chance on it. When it comes to funding abortion projects, folks have a lot of feelings about it. Many wouldn’t do it unless it focuses on policy. I receive little donations here and there but it’s not like fundraising or grants. With my 501c3 status, my next step may be to find a grant funder that does not have an abortion-related focus so I can get someone to edit the rest of the audios. Right now there are 162 stories up, but I have over 140 that need to be edited. In addition, I did a collaboration with the Abortion Care Network and recorded 30 interviews with abortion providers and allies – only 4 have been posted so far. My full-time job takes all my time and really keeps me from doing all the work on The Abortion Diary I love to do and yet, people continue to email me wanting to share their stories. There is a pile that needs to be edited and I want to get that done. I want to share these stories with the world,” Melissa stated.

There may never be a greater need for The Abortion Diary in our history than now. Melissa’s honest, open heart provides a much needed space for those to be vulnerable as they share their truth and release all the feelings they’ve carried in silence. As many voices rise up in favor of one side or the other, we lose sight of all those voices in the middle – people whose stories need to be told because in the sharing of our stories, we find ourselves – our humanity- and remember that we are all just looking to be seen, heard, and understood with compassion.