During the COVID-19 pandemic, Priyanka Chaudhary moved to Kathmandu, Nepal. Growing up, she cared for several pets in her house and had always wanted to do something for animals but did not know where to start. However, she soon found a reason.

While leaving for the office one day, she witnessed a dog being struck by a vehicle. She panicked at first but then, instinct kicked in. As an animal lover, she remembered the many animal shelters she followed on social media and called each one.

Unfortunately, all of them were occupied; there were no vacancies. The dog was bleeding profusely, so she picked him up and rushed him to the vet for treatment. “I took the dog in after that because I couldn’t find the owner,” said Priyanka. “That was the conception of Project Maya.”

By taking in this dog, Priyanka knew it would be up to her to care for him. She said, “Before the pandemic, local shops and hotels used to feed dogs with their leftover food. Unfortunately, these dogs were truly abandoned when COVID hit.” Seeing this, Priyanka started feeding close to 40 of these stray dogs daily. “I could recognize every dog,” she shared. Yet, within six months’ things started to change. Dogs give birth two to three times a year, so the number of dogs increased to more than a hundred. 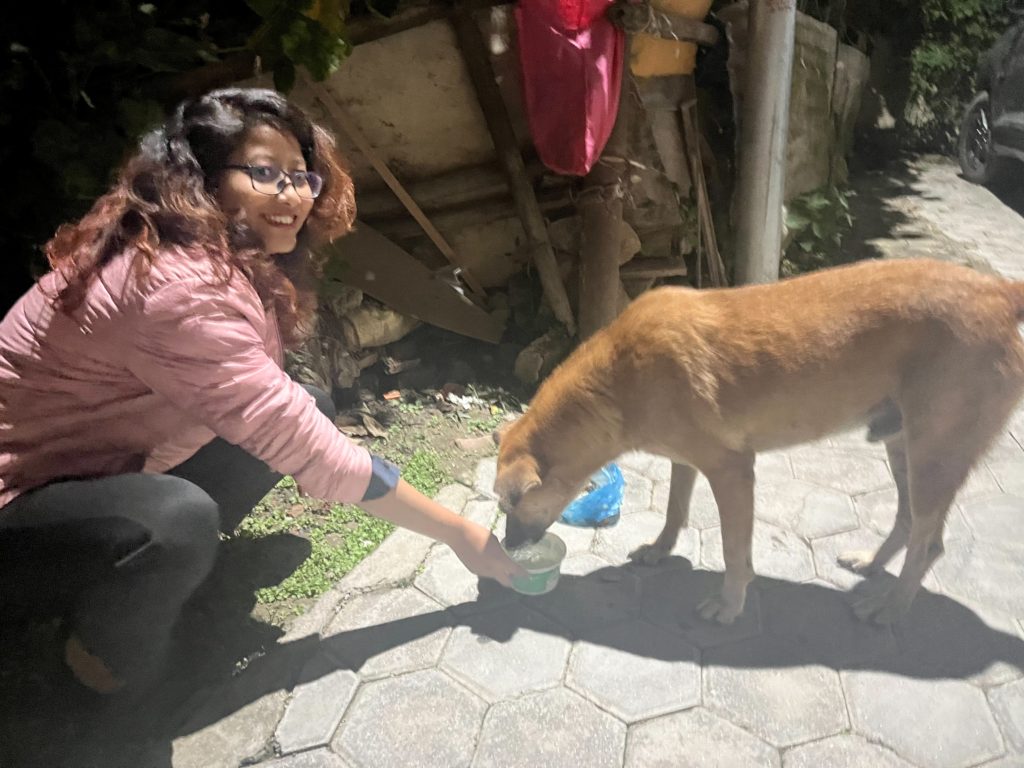 “There was no way I could give attention to all of them. I had to do something,” she explained. When asked about whether or not Priyanka thought about opening an animal shelter, she acknowledged that the thought had crossed her mind but she was looking for a more viable solution. Priyanka added, “Yes, that could have been one option. But I wanted to do something more sustainable. I believe that population control is a long-term strategy.” She went on to explain, “Spay and Neuter is the best option for stray animals at the moment. The way I see it is that population control will help these dogs to not die of hunger and torture. I believe this way although we can’t end their suffering we can certainly reduce it.”

One of the first things Priyanka learned was how to tell whether or not a dog was neutered. “One way to know was to look at the dog’s right ear for any kind of mark. Another thing is that we had to be careful about the number of dogs we spayed and neutered. Lastly, while it may be intuitive to spay and neuter an equal number of male and female dogs, that may not be the best approach. It is always recommended to spay more females because they are the ones giving birth to puppies. Now, we have spayed 10 dogs.” The next step for Priyanka is registering her social enterprise with the government. “I am also speaking with the local government to collaborate on this,” she stated.

Before starting Project Maya, Priyanka knew she wanted to work with animals. “Getting funding from The Pollination Project helped me a lot in planning my long-term dream. When I was young, I wanted to be a veterinary doctor. Sadly, I could not realize that dream. This way, I get as close to it as I can,” she shared.

When asked if she hoped she would receive the grant, she smiled and responded “Well, I knew I should get it but I did not want to get my hopes too high. The Pollination Project was one of the few organizations that gave grants to individuals and not just registered nonprofits so I knew the competition would be cutthroat. I was mentally preparing myself to get started without the funds. Whatever it took, I was ready. Fortunately, it did not come to that!”

To all the potential TPP grantees, Priyanka has some advice, “Don’t get stuck in the small details. Even if you don’t get the grant now, continue doing small things to make a change. It doesn’t have to be very big. I think the small steps matter the most.”