Angela found a bird in a garbage can while throwing out the trash, it was drenched in food oil and unable to fly. The young girl, who was only six or seven at the time, ran back inside her home wondering what to do. Her Mom who’d grown up on a farm told her daughter not to worry as they retrieved the bird, cleaned it and gave it time to rest before celebrating as it flew off. It was her first animal rescue but it wouldn’t be her last. For years, she’d show up at home with dogs, cats, birds – once, she even brought home a giant, white rat and had 32 mice. Despite moving across the country multiple times and living in over 30 states, Angela always brought her animals along, nurturing each one with the compassion she’d learned from her parents. Today, Angela uses her heart and creativity to shine the light on the mistreatment of animals and teach others how to care for them in a fun, character-filled podcast named, The Kit Bull Story. It is the story of Kit, a rescued pit bull with a unique ability, who goes to live with Rose, the owner of a doggie daycare called, Wild in the City. 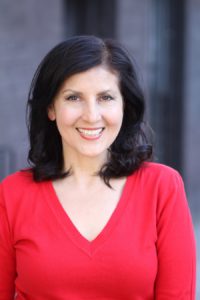 Years ago, Angela wrote a story about a dog that inspired her and the mistreatment of animals she’d seen on her many travels. Though she hoped to bring awareness and an end to the mistreatment, she feared it might be too graphic for children, so she put the story away. Then, in March 2020, Angela became very ill with Covid-19. As she recovered, she felt such gratitude to be alive that she decided to bring her dream to life and revisited the story. This time, she imagined creating a short, animated film but the cost was too steep. It was when she stumbled upon podcasts that everything came together.

With a voice acting background and a large amount of research, Angela began building The Kit Bull Story podcast. Though every step presented a new learning curve, her desire to help animals was the fire that kept her going. In looking to fund her venture, Angela discovered The Pollination Project.

“I liked the idea of The Pollination Project. I’m vegan and all for animals, so it was perfect. When I got the grant, I was floored, totally floored because I didn’t expect to get anything. I was so excited. I simply could not believe it,” Angela said, with a warm smile on her face.

An ad in Backstage, a NY publication that features calls for auditions, brought in 200 responses and as she worked to assemble the cast, she faced yet another challenge. As a member of The Screen Actors Guild or SAG,  she needed to complete an insurmountable amount of paperwork and learn all there was to learn about assembling a cast and setting up rehearsals. Once again, her love of animals was the driving force and before she knew it, she had a podcast editor and cast that was ready to bring her fantastic characters, like Scat the Cat, Chiquito, Maximilian, Mr. Overdone and more, to life. 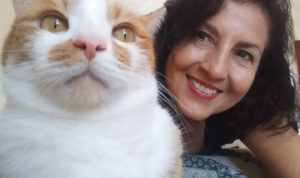 Kit, the main character, and Rose, Kit’s owner, end up educating and helping dogs, humans and the public. Thirteen voice actors from around the U.S. bring the characters to life with grace and humor while telling stories that address the maltreatment of animals in a way that’s engaging and leaves a lasting impression.

Many of the episodes are based on Angela’s real-life experiences with animal rescues as well as her everyday observations of people and their pets. In fact, The Kit Bull Story Street Chats – a new segment born from the podcast –  has been an inspired way for Angela to maintain connection with people and their animals in New York City. Strolling through parks or down the street, Angela will often come upon a person walking their dog – or cat – and invite them to do a 30-second interview that she then posts on her social media channels. Recently, she asked a gentleman who had a choke collar on his dog, how he felt about choke collars overall and she asked a woman to share her opinion about people who simply release pets onto the street when  they no longer wish to care for them. The interviews are brief but, much like the podcast, they are insightful and inspire deeper thinking about what animals face.

As Angela prepares for Season Three of the podcast, the hope is that people will learn from and share the stories they hear in an effort to alleviate the mistreatment of animals and create a more compassionate world. The podcast is presented on www.thekitbullstory.com and on all the major podcast platforms such as Apple Podcast, Spotify, Tunein, Podchaser and others. 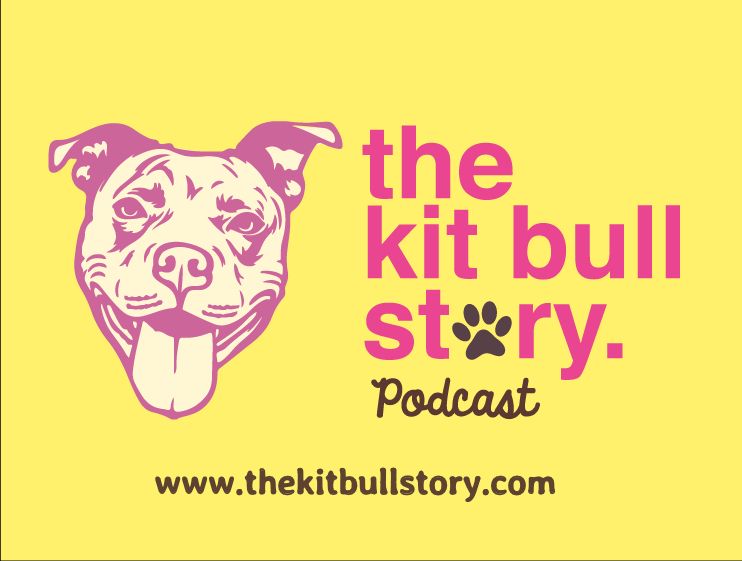