Allyson Allen is not only an exceptional quiltmaker, she’s an artist and storyteller who is using her gifts to create works that inspire reflection and, most recently, stand up to censorship. In 2019, Allyson was thrilled when she won the Laguna Beach Arts Alliance Honarkar Family Grant. Her Piece-ful Protest, a 36-piece quilt exhibit which explores issues ranging from climate change and Black Lives Matter to LGBTQ rights and women’s issues, and more, was to be shown at the Community Art Project gallery which lives on the second floor of Wells Fargo Bank in Laguna Beach, California. The onset of the COVID-19 pandemic in 2020 meant that the exhibit would be postponed. Then, on January 19, 2022 the exhibit was given the green light and the pieces arrived in their new home, much to the joy of Allyson. However on January 26, 2022 – a mere 7 days after it had begun – Wells Fargo contacted Faye Baglin, board member and curator for the Community Art Project and asked her to remove the exhibit after receiving complaints from some customers who found the subject matter “too edgy.” 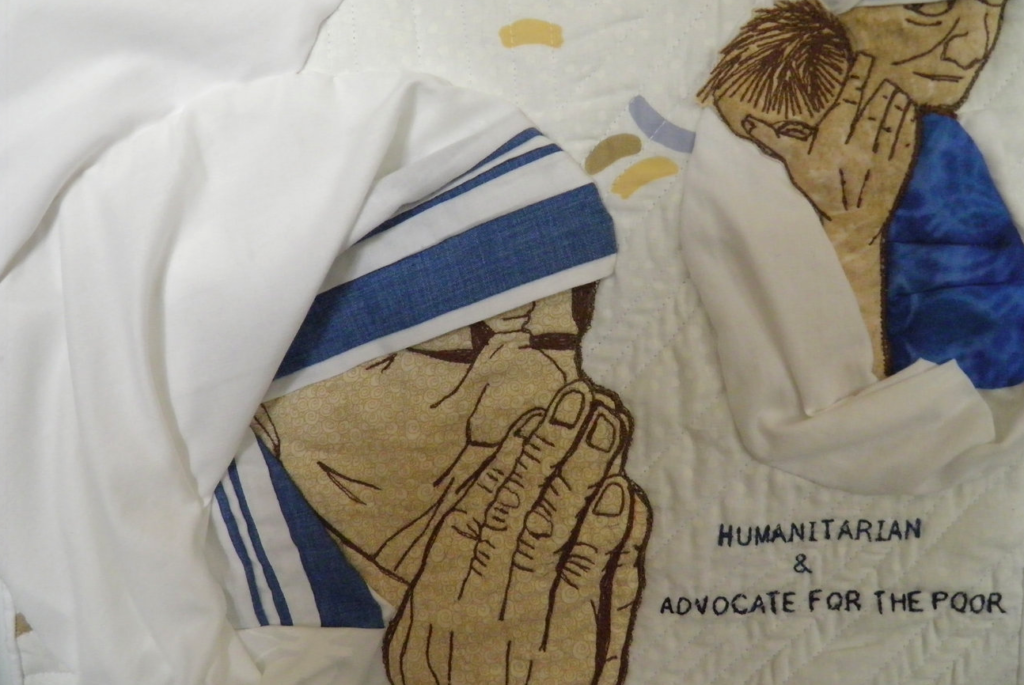 Word spread but the backlash spread even faster as Allyson not only received apologies but was flooded with offers by places, including galleries, that were more than happy to display the exhibit. In the end, it was the invitation from Pastor Rodrick Echols and the Neighborhood Congregational Church that led her to agree to display her pieces. The church space was perfect for Piece-Ful Protest which includes a beautiful sanctuary that now houses a quilt honoring Mother Teresa.

“This wasn’t as eye opening for me as it was for the Laguna Beach community. They are known as an artist colony and they’ve been embarrassed. Even the Mayor said when asked about it, “It’s art. If you don’t want to see it, then don’t look at it.” The outpouring of support and apologies and stepping up has shifted the attitude of a huge part of the community,” said Allyson.

Before she was even six years old, Allyson’s sister taught her to sew and that sparked a love for creativity that’s continued throughout her life. Ultimately, it was quilting that stole her heart. For Allyson, it is the hand appliqué – the dimensional embellishments, beadwork and buttons – that she loves when working on her colorful, expressive quilts.

Allyson’s first grant with The Pollination Project sponsored the creation and exhibit of a mixed-media, quilted textile piece that used hundreds of dryer sheets, coffee filters and tea bags to shed light on pollution and eco-friendly art practices. That quilt traveled with four different exhibits on climate change and global warming and is now a part of her current exhibit.  She followed that up with a second grant to teach recycling with junk journal workshops in the Sun City public library, the Ontario Museum of History and Art, and at a summer camp. For the Piece-Ful Protest exhibit, she even created three junk journals for her exhibit guests to sign in and leave comments. Both grant projects encouraged reducing our carbon footprints.

Over the last 30 years, Allyson has quilted more than 2,000 pieces and her work has touched thousands of lives. From children with AIDS or orphaned by AIDS in Africa for whom she made pieces with California Youth Authority participants and working with various outreach organizations, to creating beautiful quilts that appear in textile art exhibits around the globe, Allyson’s pieces are a gorgeous dance of beauty and activism, reflection and connection. In fact, one, powerful connection unexpectedly helped to protect lives.

Allyson’s niece who has inherited her aunt’s love for creativity creates stunning ink illustrations. After doing an ink drawing for a woman named Paula whom she met in one of Allyson’s classes, Paula mailed her a box of fabric. Knowing her aunt would love the fabrics, she gifted them to Allyson. When Allyson reached out to extend a thank you to Paula, the two began a friendship and Paula began mailing her  boxes of amazing fabric. When the Piece-ful Protest exhibit was postponed in 2020, Allyson began to use the fabrics to make masks for members of her community, like postal workers and grocery store cashiers. She mailed them all over the country. She even sent Paula a box of a dozen masks. Paula responded with a thank you and asked if Allyson could make some for her co-workers. To Allyson’s surprise, she learned that Paula was a nurse. Allyson went on to initially create 120 masks for her and her co-workers and followed up with another 150 at Christmas. In all, Allyson made 1,500 masks during the pandemic. She wouldn’t accept payment; it was simply a way to care for others. That is a theme in all of Allyson’s work – while the mask project was an illustration of caring for others by protecting them, her overall work is about caring for others by inspiring thought, growth, and reflection.

Despite the fact that some pieces of Allyson’s current exhibit were made years ago, they are still relevant to the conversations we are having today. Her hope is that we will begin to take greater notice, reflect and learn so that we might move forward as a nation and a world. When asked whether the piece which features a black man screaming beneath the word, “Enough” was about the murder of George Floyd, she explained that it was made years before and was relevant during the race riots in Harlem, the Capitol riots, Charlottesville, etc. . “We just don’t learn,” she commented,” and we need to.” Allyson remains committed to showing up, making work, inspiring people to think, and helping to change the conversation.

“When I read the Good News Friday newsletter, I am in awe. These are people doing real important work. I am so impressed and I feel so grateful that The Pollination Project even considered my projects because the impact was smaller – not worldwide.  Now, when I see the real and true change that has happened in the Laguna Beach community, I really am pleased that my work was a part of that – I am glad that really happened,” said Allen.

The censorship that Allyson faced is a stark reminder that there are people in this world who will not agree with our work – they may even try to silence it – but with courage, heart and determination, adversity is merely an invitation to shine your light brighter and that’s exactly what Allyson has done. This exhibit is open to the public Thursday through Sunday from 12pm-3pm through April 24th in Laguna Beach, and is already invited to travel to several other national venues.

More info about her work here 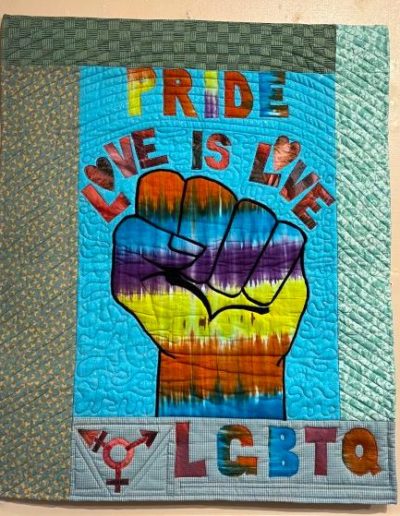 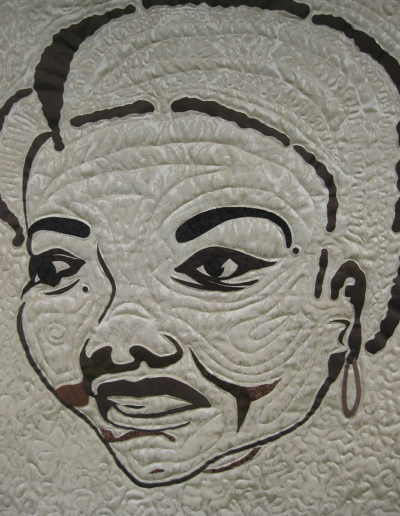 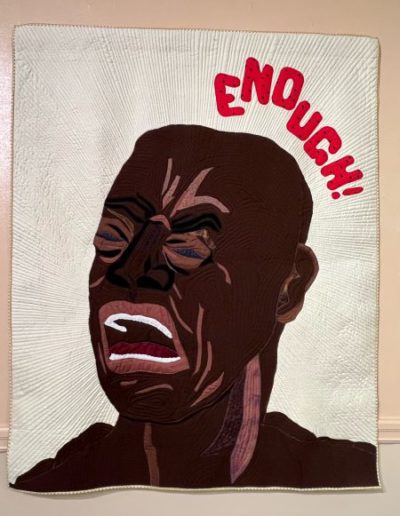 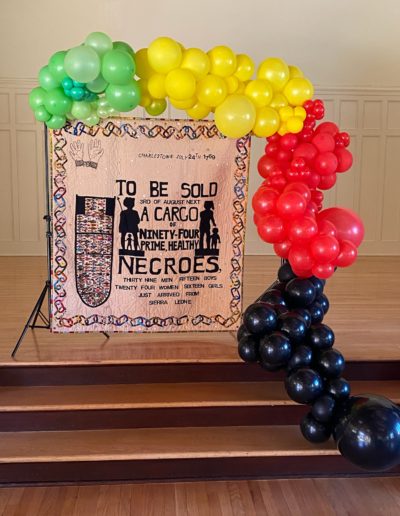