In her native Tajikistan, chess is a game of status and nobility. Many children are enrolled in chess training at the same time they go to nursery school, but this wasn’t the case for Sohibjamol. She grew up in the remote Pamir Mountains, where her father gave her chess lessons at home.

As she entered competitions, she was often teased and discounted for not having a formal chess pedigree. Yet she won and continued to win, becoming an international champion.

During one competition, she looked up to witness a boy in a wheelchair being forced out of the venue. After the match was over, she found the boy and learned he was made to leave only because he was disabled.

From this experience, the Vilka Chess Club was born.

“Vilka is a Russian term for a special powerful move in chess when a knight, which is weaker than the King and Queen, can unexpectedly turn an entire game around,” says Sohibjamol. “For us, a knight symbolizes a person with disabilities that, if empowered and put in the right position, can be a game changer.”

Seed funding from The Pollination Project was the first support that the Vilka Chess Club received. Sohibjamol used it to buy chess boards, including some with braille, as well as books and special clocks to train children with hearing and speech impairments. With the support of dozens of volunteers, the Vilka Chess Club grew from 15 children to over 200 today, many of whom have a range of disabilities such as vision impairment, autism, cerebal palsy, and others.

One of those students is a 14 year old boy named Shoghoz, who is partially sighted. Shoghoz recently won first place in the final regional tournament organized by Vilka Chess Club, and is currently competing for the Presidential Cup in the republic of Tajikistan. Yet the real prize is the confidence and pride each child has as they see themselves succeed at a game they have long been told they cannot play.

“Chess is a game of the mind. But it can also be a tool for inclusion,” says Sohibjamol. “Every child is special and unique, and should be accepted just the way they are.” 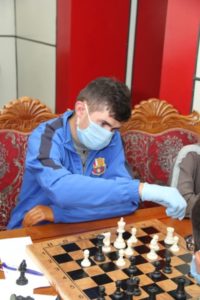