Immunity Gardens: The Painting That Came to Life

Nearly ten years ago, Bethany Fancher packed her bags and flew to Hyderabad, India, and then continued into the countryside to the village of Chandrakal.

She didn’t know what to expect; only that the orphanage where she had agreed to teach art was home to about sixty children who were born HIV+ in India, the country with the largest number of AIDS orphans in the world. Newly opened, the home was near the hospital where many of the young resident’s parents had sought treatment.

Despite the tragedies that brought them there, Bethany was inspired by the sparkle of joy and wonder she saw in her students. She dove into projects that pushed them to be their most creative selves, including one in which each person made a paper mache animal. Later, Bethany edited each individual creature into a photo with the child who created it. 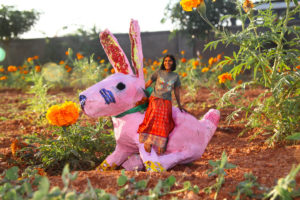 “One girl, who had made a rabbit, was so surprised to see herself in the photo! I’ll never forget it,” Bethany laughs. “She was speechless, looking at me like I was practicing magic! Which I loved, because art is magic in so many ways.”

One day, they were working on a landscape scene.

Bethany encouraged them to paint verdant mountains, bright blue water, peaceful animals, and fluffy clouds. When they were finished, they brought the paintings outside to dry. Immediately, Bethany was struck by the stark differences between their paintings and the compacted earth, lack of greenery, and aridness around them.

Every great teacher is also a great student, and this experience was the seed that caused Bethany to learn about permaculture and expand her lessons beyond art. She began teaching the children permaculture designs to implement. Together, they learned how to help restore the soil and grow healthy organic foods. Gradually, the environment around them began to look more like those lush paintings they had created before.

For one of the children, these were lessons that stuck long after Bethany had flown home to America.

After Vishnu left the orphanage, Bethany loomed large in his mind in the way only the best teachers can. He remembered her fondly as a role model, and the impetus for his own love of art and gardening. Years went by until one day, he was able to send her an email. Even he does not recall how he had known her email address, because while at the home, the children had not been allowed on the internet. He had just observed Bethany when she was taking care of some computer business and somehow memorized this thing called an “email address.” 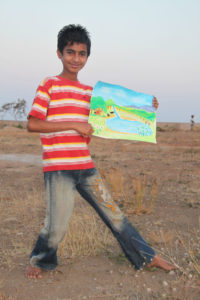 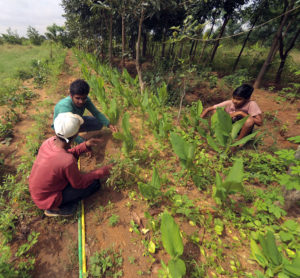 He was surprised when she responded, having assumed she wouldn’t even remember him! When Bethany returned to India for an art residency, the teacher and her student, now a young adult, were able to reunite in person. Bethany even helped Vishnu get into a special permaculture school, where he deepened his training and knowledge in community with other like-minded students.

Recently, Bethany and Vishnu received seed funding for their “Immunity Gardens Project,” which trains children in rural India to become ambassadors and lead regenerative gardens within their schools. Just as Bethany’s lessons sparked in Vishnu a love of gardening, he hopes to inspire curiosity in the next generation of aspiring gardeners and farmers to show a way toward reversing the carbon footprint.They both share a fervent belief that our collective future is at stake, and there are tangible things that can to be done to help.

“Older farmers accustomed to using chemicals are harder to teach and bring around to these ideas,” says Vishnu, “but children understand them so naturally. Perhaps I can’t change the entire world, but I hope to at least shape a few paths as Bethany helped shape mine.”

The gardens are focused on growing medicinal herbs, along with fruits and produce, which is especially important in light of the impact COVID-19 has had on rural villages in India. Vishnu has lost friends to COVID-19, and many of his family members are sick even now. Drawing on ancient traditions of Ayurvedic medicine, each “immunity garden” will bolster community health while restoring microbes in disturbed soils.

“So many of the microbes that help a plant resist disease, also bolster our own immune systems,” explains Vishnu. “Like roots expanding networks underground, the children will help reconnect us to the earth and each other.”