Birthing a New Dream of Equality

When she became pregnant at 18, Maria del Mar Jaramillo felt her dreams come crashing down around her. She spent her pregnancy full of worry, wondering if the life she had envisioned for herself would still be possible. With the loving support of her husband and family, Maria was able to balance new motherhood with her ambitions, even obtaining a law degree.

Maria never forgot that feeling of fear and helplessness, and knew that many other young Columbian mothers didn’t have the same happy ending. Her project, Soy Oportunidad, was founded to give young mothers perspective, opportunity, and hope for the future.

“When a woman is pregnant, she has about 9 months to rethink what that new future will be that awaits for her and her child,” says Maria. “New conversations emerge about caregiving, divisions of responsibilities at home, and especially, an exhaustive planning of the way in which time will be divided between work obligations, family relationships and the new human being that comes into the world.” 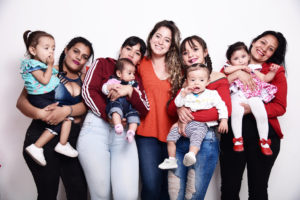 But for many of the thousands of Columbian women who became mothers as teenagers, planning a future is a difficult prospect. Weighed down by gender inequity, vulnerable circumstances, and poverty, many resort to subsistence labor to survive.

Maria wanted to take that 9 month period and transform it from a time of fear to one of hope. Initially, she started by asking for donations for financially insecure women in Bogota, but she quickly realized that a longer-term solution was needed. From this genesis, Soy Oportunidad was born.

The project starts with self-reflection and vision, reaffirming each woman’s value, rights, dreams, and potential. Next, Maria encourages each woman to think about their individual path to self-sufficiency and abundance. For some, that looks like entrepreneurship, which Soy Oportunidad supports through consultancies & finding seed capital. For others, that looks like telework, which Maria helps facilitate through relationships with businesses that need remote employees. In this way, each woman is able to envision a way to generate income for their families from home, without leaving children alone.

So far, Maria’s program has graduated hundreds of young mothers in 5 Colombian cities, created 25 new businesses, and attracted 10 major employers as part of her referral network. This year, 80% of participating women secured meaningful employment through this network.

“Each of these women has talent,” Maria says. “We are just helping them see it.”