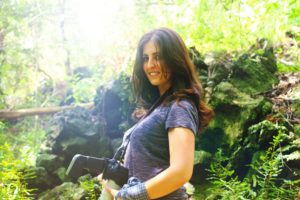 One day several years ago, photographer and animal activist Tamara Blazquez Haik was walking home when she came across a poisoned opossum lying dead on the sidewalk.

Many people might have kept walking and not given this a second thought, but Tamara couldn’t help but wonder why someone would want to hurt a creature so harmless. She further thought about how in her home of Mexico City, many people seemed to view nature as alien; she reflected on how concepts like coexisting with wildlife seem far away amidst so much traffic, pollution and development.

Mexico City is home to almost 22 million people and is one of the largest cities in the world. Yet it is also home to over 2,200 animal species, including 32 which are found nowhere else in the world. Many of these are endangered. Tamara decided to use her skills in photography to document as many species living in Mexico City as she could, and to use those images to spark awareness, empathy, and respect for the animals who live there. She received seed funding for this project from The Pollination Project, and based her rationale on the idea that people do not protect what they do not love, and they cannot love that which they do not know exists.

In vibrant detail, her photographs capture the gauzy wings of Dainty Sulphur Butterflies, the prehistoric armor of the Crocodile, and the cautiously elusive Ring-Tailed Cat. She has photographed the colorful scales of the Prickly-Necklaced Lizard, territorial disputes of Mexican Tiger Herons, and the majestic power of the Black-Collared Hawk. These images give everyday residents of Mexico City a glimpse into an entire world that they may have never before considered.

Tamara has brought these images to schools, highlighted them in exhibitions, and found new audiences through two partnerships with national news outlets. Even through COVID-19 restrictions, she has been able to facilitate virtual workshops for school children to learn about the natural world that exists even within such a large city. Now, Tamara is compiling her work into a photobook that she hopes to distribute to local schools.

Her photographs were recently used as evidence in several lawsuits to protect endangered species like the axolotl, a charismatic species of salamander known for its ability to regenerate limbs. The axolotl is extremely endangered and only found in the canals around Lake Xochimilco in Southern Mexico City. Despite being a UNESCO heritage site, Lake Xochimilco is threatened by development. The documentation that Tamara’s work has provided is an important part of the effort to save this ecologically important area from further urbanization.