Eric and Sheryl Kolb lost Sheryl’s grandmother, Olive, to Alzheimer’s in 2006. Just two years later, Sheryl’s mother Trish began having trouble remembering words and recognizing familiar objects. For the next twelve years, the family went through all the joy, pain and grief that anyone who has served as a caregiver to someone with memory loss knows all too well.

Through it all, one thing consistently brought them joy and connection: singing together. Scientists believe that the part of the brain that stores musical memories is often less impacted by the disease. Even as those with Alzheimer’s lose many other precious memories, the lyrics and melodies of beloved songs are often preserved on what researchers have called an “island of remembrance.” This means that music can bring a sense of connection and often reduce anxiety in those suffering from memory loss.

Sheryl and Eric had dreamed of a big party for Trish’s 80th birthday, but as her memory loss progressed, decided not to wait. As they prepared to celebrate Trish’s 78th birthday, a performance by the “Meyerband” (made up of Trish’s grandchildren) was a must! When Sheryl asked her mom who to invite, Trish always wanted to “invite everyone.” For her, “family” meant more than just relatives, and extended to neighbors, co-workers, friends, and friends of friends. 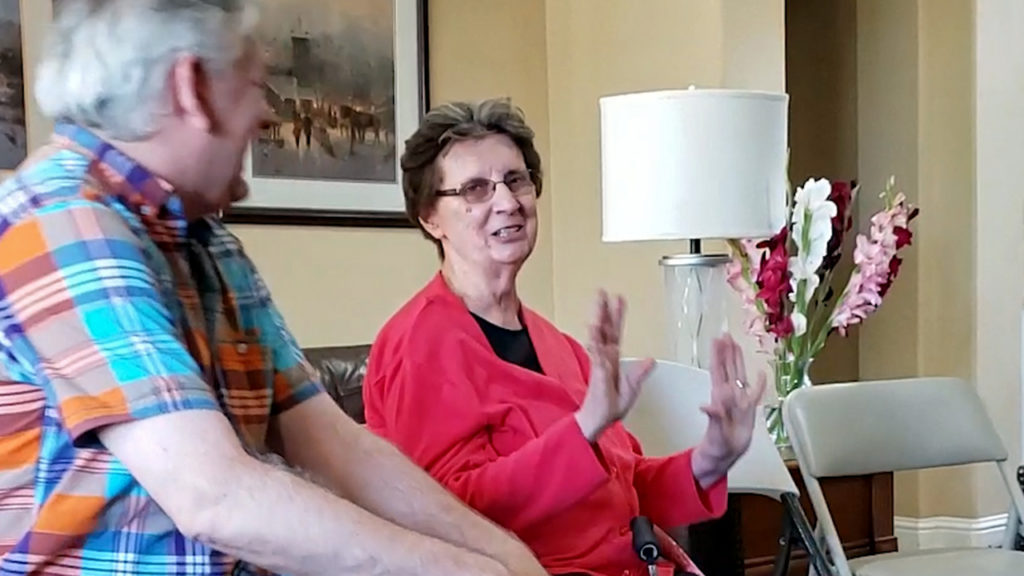 The “Meyerband” ended up performing for a big group that day, and the celebration morphed into a fundraiser they named “Songs & Smiles.” As they sang, laughed, and enjoyed time together, they also helped raise over $20,000 in support of Alzheimer’s research. The joy of that day carried them through a difficult two years ahead, until they ultimately said goodbye to Trish in August of 2019.

Now, Eric and Sheryl are honoring Olive & Trish by ensuring that connection through music, joy, and spirit of community continues. They recently received funding for the “Songs & Smiles” project, which offers sing-alongs that connect those with Alzheimer’s with their loved ones, and with their own joy-filled musical memories. The songs are widely known, upbeat, and uplifting. In this age of COVID-19, they are offered virtually for anyone to participate in, and have the added benefit of large font lyrics that scroll across the screen.

“My goal is to get families singing together with their loved ones who have Alzheimer’s,” says Eric. “I have seen the power of music to connect people with memories. Singing together also provides respite, a short break from the challenges of Alzheimer’s. I hope families who use these videos will experience joyful moments connecting with each other.”

Just as Trish would have wanted, “everyone” is invited to join in the fun.