Greenhouse: Material Capital & the Art of Giving and Receiving

This week in Greenhouse, our friend Birju Pandya shared his experiences in experimenting with gift culture, seeing the world through a lens of abundance, and designing an intentional life. He joined us in our second week of Greenhouse to talk about “material capital.” A somewhat analogous term that many might be more familiar with is “in-kind giving,” and Birju encouraged the group to think from the perspective of both giver and receiver. Through powerful stories, he inspired the cohort to see that the currency of material capital is relationship.

In small groups, the cohort of nearly 100 grassroots volunteer leaders from across the globe were invited to explore two questions: What did they have to offer one another that would feel joyful to give? And secondly, what did they hope to receive from each other that would meaningfully advance their service work? The answers ranged from specific skills and expertise like seed starting, to connections in the publishing world, to a place to stay or shared office space in a specific city, to translation services, and everything in between. Beautiful connections were made, contact information was shared, and new projects and friendships were seeded among like-minded heartivists.

Herbert Lima was one of those participants. He is a proud co-founder of Fábrica dos Sonhos (The Dream Factory), a non-profit that works to protect life, biodiversity and promote the right to dream for all people. Hearing Birju share the story of “Karma Kitchen,” a pay-it-forward style restaurant that operates entirely through gift, Herbert was inspired. He shared the story of Karma Kitchen with Giuliana Dias, who works with him in youth programming. Giuliana recently prepared a dinner for 40 people in The Dream Factory’s Vegan Kitchen, and it was so well-received that she had been dreaming of opening a restaurant.

“After we learned about the Karma Kitchen, we told her the idea and she loved it,” Herbert wrote. “She is now inspired in making a Karma dinner and she is already dreaming of building a Karma Kitchen here in the city we live – São Lourenço, Minas Gerais State-Brazil.” 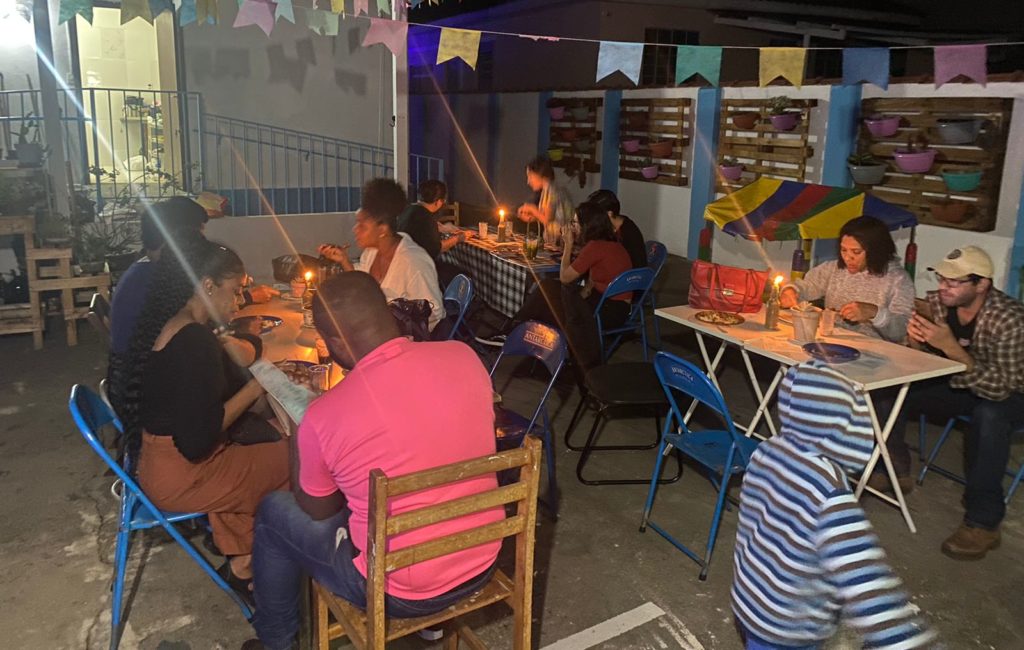 This dinner was organized by Dream Factory with Giuliana and 10 volunteers.

Later in the week, the group gathered again for some fun improvisational games designed to explore the process of asking for support and offering what each person has to share. What happened was a heart-warming surprise. While members of the cohort began the exercise with a role-play, they soon moved beyond it and started thinking about ways to truly help one another in a real-world way. As one person shared:

“Being here with everyone makes me feel like home.” It is true.

This space is becoming a home where individuals hold each other dear, supporting and encouraging each other to dream new ways of caring for their communities and this world.

Join us for our Community Call next week , Tuesday, October 4th from 10am – 12pm where we will explore Cultural Capital.

An outreach of The Pollination Project, Greenhouse is designed to expand the consciousness of participants in ways that promote connection, community, resilience, and collaboration for grassroots changemakers around the world.

When we think of development in a non-profit context, often we think only of ways to invite more financial capital into our organizations. But what if other forms of wealth exist that have the opportunity to catalyze our work in ways that strengthen not only our missions, but also our individual capacity to see those missions through? Reflecting our belief that social change requires inner transformation, together we will map the nonprofit ecosystem in ways that explore social capital, material capital, cultural capital, experiential capital, spiritual capital, as well as financial capital.